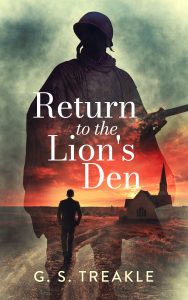 About Return to the Lion’s Den:

When eighteen-year-old Daniel MacRae escaped his father’s alcoholic abuse in 1981, he left his Indiana hometown, uncertain he would ever return. In the years that followed, he pursued an education and embarked on a very successful career in broadcast journalism.

In April 2005, as Daniel is settling into his new role as a senior network news executive, he receives a desperate plea from his estranged mother to come home and help deal with the affairs of his dying father, Jerome. Despite his reluctance, he returns for a difficult and emotional reunion. While pursuing his new assignment, Daniel resolves to forge a new bond with his father and rebuild his broken family. However, before he can do so, he must first unearth the truth about an unspeakable event from Jerome’s past.

Author Bio:
Greg Treakle was born and raised in southern New Hampshire but has lived and worked in the Northern Neck of Virginia for more than forty years. Though he originally aspired to careers in journalism and creative writing, he received a degree in Mathematics from Virginia Tech in 1984 and spent his career working for the US Department of the Navy. In the years immediately preceding his retirement from government service in 2020, he dove back into story writing and set his sights on writing and self-publishing his first novel, Return to the Lion’s Den. He is currently living in Virginia and is at work on his second publication, a collection of modern family short stories.