Griffin Andrew Meade, a gay 18-year-old teenage boy, moves to Bartholomew Bay, Maine with his family in 1983. They arrive at their new home Antioch, the ancestral mansion of the wealthy Bartholomew family, and soon discover it is haunted by the spirit of Angelus Bartholomew III, who died when he fell from the Widow’s walk of Antioch in 1919, when he was also 18 years old. Griffin learns through life-like dreams that Angelus committed suicide by leaping from the Widow’s walk and was not pushed from the Widow’s walk by his abusive father, the powerful Angus Bartholomew, who prevented the public from discussing his son’s death. The ghost of Angelus also reveals to Griffin other details of his tortured life, including erotic flashbacks with his paramour Lazarus Benedictine, the son of the lighthouse keeper of Bartholomew Bay. While Griffin learns of Angelus and Lazarus’s ill-fated romance, he becomes involved with his first same sex romance, Christian Gutmann, a young man raised in Bartholomew Bay, who knows only part of the story of Angelus’s untimely death. Griffin discovers that he is to a play a vital role in a scheme to re-unite Lazarus, who is still alive, with Angelus in the afterlife. Griffin must convince Lazarus to take his own life during the Summer Solstice, the same day that Angelus killed himself in 1919, in order for his soul to be trapped for eternity in Antioch with Angelus’s soul. Griffin learns that committing suicide is a sin that prevents your soul from going to heaven and this is the reason for Angelus being trapped in purgatory in Antioch. Faced with the decision to either participate in Angelus’s plot or have his loved ones suffer deadly consequences, will Griffin overcome the threats of a preternatural disturbance or succumb to a spirit’s lethal plan?

Spoiler Alert! (read on only if you want to know the ending):
When Lazarus dies from a heart attack on the night of the summer solstice, his soul travels onto heaven, as he has not committed suicide. This enrages Angelus. In his anger, Angelus threatens Griffin, telling him that his family will suffer because he has lost Lazarus once again and will have to be alone in Antioch for eternity. Ultimately, Griffin commits suicide to appease Angelus and save the lives of his family, where his soul will reside with Angelus for eternity. These intersecting stories of Griffin Meade and Angelus Bartholomew III, of the sacrifices we make for our loved ones, are set respectively during the turbulent early 1980’s, when the gay rights movement increased its visibility in reaction to the AIDS crisis, and the earliest years of the 20th century when same sex relationships were not only considered immoral but also illegal.

Buy the Book On
END_OF_DOCUMENT_TOKEN_TO_BE_REPLACED 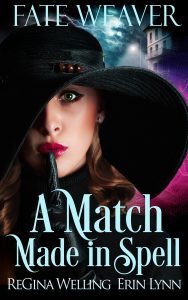 About A Match Made In Spell:

What good is a witch with no magic?

I’m Lexi Balefire and I wear a lot of hats, but none of them are tall and pointy. I spend half my time making love matches that last forever, and the other half trying to keep my faerie godmothers from turning each other into toads. Or worse.

I come from a long line of witches, some of them wicked, but none of that will matter if my magic doesn’t awaken before midnight on my next birthday. If I miss that deadline, I’ll never be a true witch.

If my mother and grandmother hadn’t used their magic to kill each other, one of them might have been able to give me the keys to the mystery and I’d be one step closer to claiming my Fate Weaver heritage.

Now, I guess I’ll have to figure it out on my own.

The Fate Weaver series featuring the enchanting Lexi Balefire, matchmaking witch, has elements of mystery, romance, and the supernatural. It’s an urban fantasy with lots of humor and a cozy mystery feel. 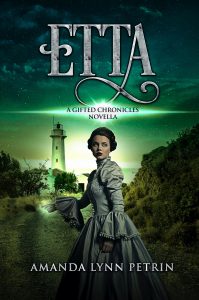 All Loretta wants is to move to Paris, find love, and raise a house full of children. Preferably with someone kind, strong, and handsome.
Everything changes when she is brutally murdered by someone she trusts, only to wake up the following day, unscathed.
As Loretta struggles to make sense of her new lease on life, she builds unexpected friendships and meets the man of her dreams…but none of it will mean anything if she can’t stop the man who hurt her.

Etta is a prequel novella featuring characters from both the Owens Chronicles and Gifted Chronicles Series. Fans of Cassandra Clare’s The Infernal Devices will love this historical paranormal adventure! About The Hawthorne Witch:

Sometimes I’d rather shield my eyes than see darkness in light.

And things got weirder. A witch was threatened with sacrificial murder. Another witch spent all day murmuring to herself, in the center of a circle of candles, on a pentagram she painted in her dorm room. It all pointed to the wicked witch of the Abaddon coven. If I was right, it might just take a full-fledged witch showdown to stop her.

So? Bring it on. What did I have to lose? Just everyone I love. And maybe my soul.

The Hawthorne Witch is a NEW RELEASE published 12/28/20 on sale until the new year at $0.99 USD. It is Book 3 in the Hawthorne University Witch Series. The books in this series are complete self-contained novels not ending in cliffhangers. Some spoilers cannot be avoided, but this is a stand-alone novel that can be enjoyed without reading the other books in the series. “About Monique Under The Moonlight`:

A rogue wolf is threatening the city, and he now has Monique in his crosshairs.

Monique wants to get food on her table when she goes on her yearly hunting trip, she meets Alaric, the ass alpha who says he wants to keep her safe. But she discovers there’s more to the brooding alpha when he takes her to his home for ‘protection.’ Getting on his bad side might not be avoidable as the imprint links them as mates.

Now she has a choice. Walk away or become the alpha female.

Alaric has kept his city safe for years, but now he’s facing a threat he can’t control. Monique tested his resolve and now they have imprinted, he’s racing against the clock to get her into his bed. If he fails, he’ll lose everything he’s worked so hard to claim.

Can he convince Monique to be his alpha female or will his wolf vanish, leaving him hollow?

Shifter lovers will love Monique Under the Moonlight. Scroll up and one-click your copy today!