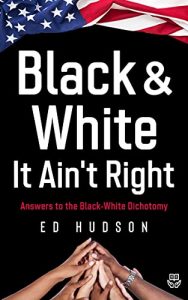 About Black & White it Ain’t right:

We have a problem in this country that is of immense proportions and has existed for over 400 years when the only ethnic group of the many that have made America their home came involuntarily. Not only involuntarily but in chains as slaves who were considered property and less than human. Although we are still the greatest country in the world this heinous sin still plagues our country. Just as systemic racism against African Americans has always and still exists so does a black, white dichotomy. Which is defined as a division or contrast between two things that are or are represented as being opposed or entirely different. Which may be the best way of summing up the relationship in one sentence between people who have labeled themselves and each other as black or white.

Buy the ebook:
Buy the Book On Amazon
END_OF_DOCUMENT_TOKEN_TO_BE_REPLACED