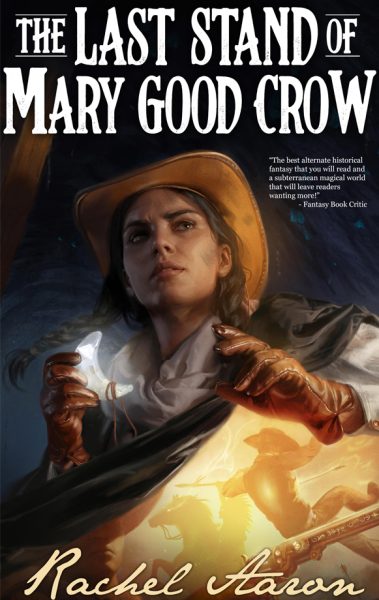 About Featured Book: The Last Stand of Mary Good Crow by Rachel Aaron

An epic fantasy of the west…

Hungry darkness, haunted guns, tunnels that move like snakes—the crystal mines of Medicine Rocks, Montana are a place only the bravest and greediest dare. Discovered in 1866, the miraculous rock known as crystal quickly rose to become the most expensive substance on the planet, driving thousands to break the treaties and invade the sacred buffalo lands of the Sioux. But mining crystal risks more than an arrow in the chest. The beautiful rock has a voice of its own. A voice that twists minds and calls unnatural powers.

A voice that turns men into monsters.

Mary Good Crow hears it. Half white, half Lakota, rejected by both, she’s forged a new life guiding would-be miners through the treacherous caves. To her ears, the crystal sings a beautiful song, one the men she guides would gladly burn her as a witch for hearing. So, when an heiress from Boston arrives with a proposition that could change her life, Mary agrees to push deeper into the caves than she’s ever dared.

But there are secrets buried in the Deep Caves that even Mary doesn’t know. The farther she goes, the closer she gets to the voice that’s been calling her all this time. A voice that could change the bloody story of the West, or destroy it all.

This Fantasy book is available in these Formats: eBook, Print

This book is in Kindle Unlimited and is a new release.