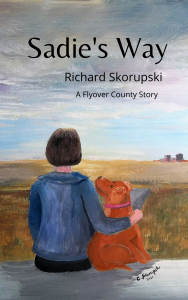 Ripped from her suburban New Jersey life by witness protection agents, seventeen-year-old Sarina suffers the loss of her mother, her little brother. It’s her father’s fault. Now the two of them have to move across the country to a new home and a new fake life.
Glenn, by pointing out a possible money-laundering scheme to his bosses, not only loses his job. He loses his wife and son to murder. The warning says, “Be careful who you talk to.”
Can Glenn survive? Can he learn to understand his teenage daughter’s feelings?
Can Sarina learn to love (or even like) the dad who had spent most of his time at work? Can she get over how her father ruined her life?
The two change their appearance and receive new names and identities. They are set down near the very small town of Helen, South Dakota where they can be safe (or can they?)
Get Sadie’s Way to see how Jim and Tracie adapt to their new lives and their new environment. See how they cope with the world around them.

Author Bio:
After a 21 year career in the U.S. Navy, Richard returned home to his native state of New Jersey. He followed his passion for the open waters and started a second career in the marine parts business.
However, the dense population of New Jersey and its high cost of living compelled Richard and his wife, Cheryl, to find a more peaceful and friendly environment for his second retirement. The couple now happily reside in Spink County, South Dakota.
Richard’s love for South Dakota and his appreciation for its people are brought to life in his third career as the author of his seven books centered on the fictional town of Helen, South Dakota.
Featured at the South Dakota State Fair and in prestigious publications, Richard tells the story of Rural America, then and now. All Richard’s stories are easy reading with happy endings.

The Flyover County series titles are listed below: