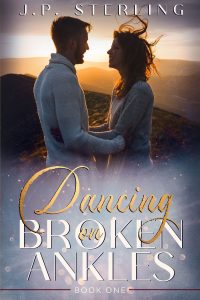 About Dancing on Broken Ankles:

When sixteen-year-old Aubergine’s parents uproot her from the posh NYC life to live off-grid in a tiny home, she reaches out to the only person available for friendship—the boy-next-door.

Aubergine White, a talented ballerina and a self-professed mean girl, who enjoys all the advantages of being a gorgeous, rich girl at her elite New York City private school, seems to have it all, until her parents get fed up with the hustle of city life and whisk her a thousand miles away to homestead off-grid in Montana.

Soon after arriving in her exile from upscale fashion boutiques and classical theatre, Abs learns she needs a career-ending ankle surgery which leaves her completely devastated. She receives no empathy or guidance from her parents as her father is preoccupied with the on-going care of her mother’s mental health.

Aubergine’s life changes for the better when she befriends the neighbor, Fulton. Fulton was the biggest dork at her old school, but now that she is forced to spend time with him, she finds him to be kind, patient and most importantly, he shows her the compassion she had been missing. Just when she starts to trust him, a new wound is opened when Fulton finds a way to move back to New York. She becomes determined to get a one-way ticket back to the city and she is holding on to the hope that her old life—and her former boy next door—will be waiting for her when she gets there.

A clean and wholesome, coming-of-age story about close proximity enemies who become allies and then, maybe more . . .

Author Bio:
J.P. Sterling is a wife and a stay-at-home mom with two kids. After spending hundreds of hours researching her own child’s sensitivities, she was inspired to write a fiction novel to show the world just how special some kids can be. Thus Ruby in the Water was born. Soon after Ruby’s release, she started getting emails from readers thanking her for Peter’s story and asking for another book. So, she wrote Lily in the Stone and then there were two.

Now, she has a serious writing addiction and is currently working on her second YA series that is due out in 2022.

Author Clean Code: I like to make my stories about the story and not about a bunch of profanity, mature content, or graphic violence that are just there to shock you. I want to be able to share these with my kids someday 🙂