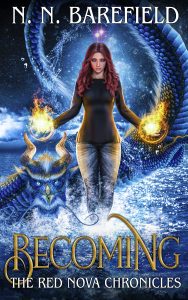 Where are you, Sean?

I’m right here, he said slowly. In fact, I’m right in front of you. I’m the dragon, and I don’t want to freak you out… but Sachie, you’re a dragon too.

Sachie and Sean were sixteen year old twins who’d always led fairly normal lives. Yes, their parents had been mysteriously murdered about a year ago, and they were now living with a man who claimed to be their grandfather, but other than that, they were just your typical high school kids, right? At least that’s what they thought until that fateful night on All Hollow’s Eve when their lives changed forever…

Dragons were real! Their family had kept this secret from them their entire lives, but now the giant, flying lizard was out of the bag… literally. Suddenly, Sachie and Sean find themselves being flung into the past to attend a Dragon School that’s hidden in time, but they’re not alone. Another set of twins will accompany them and help them form a powerful Nexus that is destined to fulfil the prophecy which will restore balance to the world. If this all isn’t crazy enough, Sachie and Sean have to succeed at learning how to become dragons all while being chased by an ancient enemy. Four teenagers saving the world against evil, what could possibly go wrong?

If you loved The Mortal Instruments, Harry Potter or Dragon School, then get your copy today, and join Sachie and Sean as they become dragons and discover who they were always meant to be.

Author Bio:
N.N. Barefield is a self-described wanderer. Because of this, she has been fascinated by other cultures and peoples around the world. She has traveled to twenty-six countries and has lived in two of those countries and five different states. She currently resides in Florida with her son. It was with his encouragement and insistence that she delved into the world of becoming an author. Her first series, The Red Nova Chronicles, is a tribute to all the great fantasy novels she loved as a child and still loves to read today. She hopes readers will lose themselves in her worlds where magic is real. When she’s not writing, she can be found playing her flute, hanging with her family and plotting her next big project.