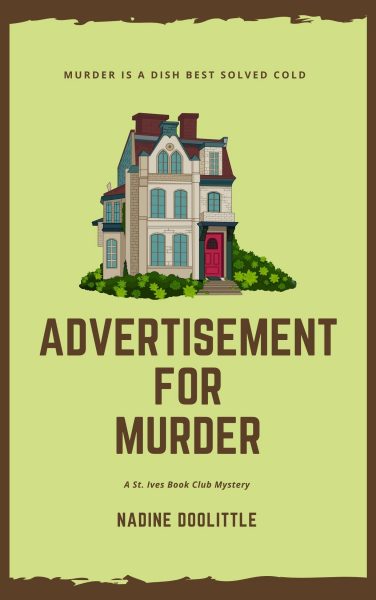 About Featured Book: Advertisement for Murder by Nadine Doolittle

In the gentle hamlet of St. Ives, a killer roams free.
In 1975, seventeen-year-old Jenny Blake was found strangled in the ruins behind the abandoned St. Ives Abbey. Her murderer was never caught. Forty-four years later, an advertisement in the local newspaper draws seven people to the home of Elliot Marks with the purpose of forming a murder mystery book club. Within minutes, Marks proposes they solve a real murder instead–beginning with who killed Jenny Blake?

Was it her ex-boyfriend, the brilliant but withdrawn Jesse Sutcliffe, who was now a homeless alcoholic? Or Duncan Carmichael, the attractive local politician who was dating Jenny at the time of the murder? What about Karen Haggerty, the bubbly school secretary, who Duncan dumped for Jenny in the summer of ‘75? Or was it Ida Greb, the town librarian who was privately glad at the time that Jenny was dead. And then there was the eccentric Elliot Marks, the club founder, who had a connection to the dead girl that no one knew about.

For Avery Holmes, who moved to St. Ives to write novels, keep a garden and live comfortably, poking into a cold case is a risky proposition. After all, waking a killer who thought he or she had gotten away with murder could lead to … well … murder.

This Mystery book is available in these Formats: eBook, Print

This book is free in Kindle Unlimited!