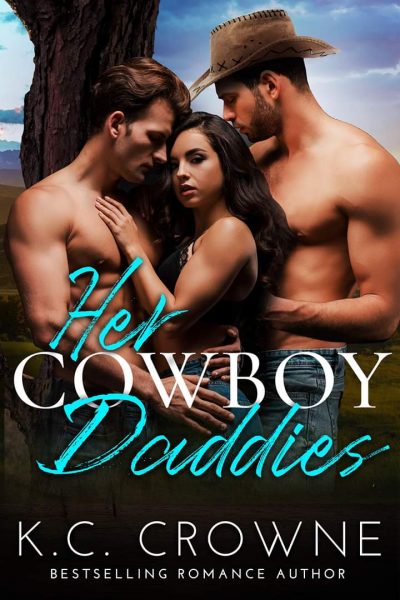 About Featured Book: Her Cowboy Daddies by K.C. Crowne

What’s every cowgirl’s dream?
Two wild stallions that can’t get enough.
How about a hot older boss – and his equally s*xy best friend?

I got my dream job at a gorgeous Texas ranch.
And I had to thank my lucky stars. Then I met my dream men…
Travis: Exciting. Wild. And dangerous.
Adam: Stoic. Patient. And tough.

And, it seems their desire has no limits.
But between days working on the ranch…
And nights bursting with pent-up lust,
I’m more tangled up than ever…

Then things take a dangerous turn.
Will we get through this wild adventure unscathed?
Or will I regret ever letting my libido do the talking?
Especially when a pregnancy test comes back positive!
For a limited time, grab this $3.99 book for just 99 cents today!

This is a Secret Baby, Menage Ranch Western Romance and part of the Rainbow Canyon Ranch Series. This is Travis’ story.

This Erotica book is available in these Formats: eBook

“About HOW FIRES END:

A dark secret born out of World War II lies at the heart of a Sicilian American family in this emotional and sweeping saga of guilt, revenge, and, ultimately, redemption.

After soldiers vacate the Sicilian hillside town of Melilli in the summer of 1943, the locals celebrate, giving thanks to their patron saint, Sebastian. Amid the revelry, all it takes is one fateful moment for the destiny of nine-year-old Salvatore Vassallo to change forever. When his twin brothers are killed playing with an unexploded mortar shell, Salvatore’s faith is destroyed. As the family unravels, and fear ignites among their neighbors that the Vassallo name is cursed, one tragedy begets another.

Desperate to escape this haunting legacy, Salvatore accepts the help of an Italian soldier with fascist ties who ushers him and his sister, Nella, into a new beginning in America. In Middletown, Connecticut, in the immigrant neighborhood known as Little Melilli, these three struggle to build new lives for themselves. But a dangerous choice to keep their secrets hidden erupts in violence decades later. When Salvatore loses his inquisitive American-born son, David, they all learn too late the price sons pay for their fathers’ wars.

Written with elegiac prose, How Fires End delves into the secret wars of men; the sins they cannot bury; and a life lived in fear of who will reveal them, who will survive them, and who will forgive them.

END_OF_DOCUMENT_TOKEN_TO_BE_REPLACED

Buy the ebook:
Buy the Book On Amazon
END_OF_DOCUMENT_TOKEN_TO_BE_REPLACED